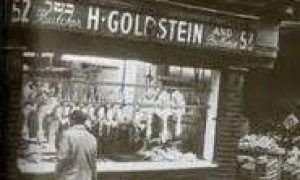 London has always been home to many Jewish settlers and this is particularly true in the East End. Jewish people have sought refuge in London for many reasons, such as migration, persecution or expulsion from countries such as Russia, and Germany. A diverse community which embraces many cultures and races, London consists of Jewish descendants from Spain, Portugal and Eastern Europe. Those from Eastern Europe are known as Ashkenazi, from Spain and Portugal – Sephardi and those from the Middle East or North Africa are known as Sephardi – Mizrachi

The first Sephardi synagogue was founded in 1656 at Creechurch Lane in the City of London, and a burial ground was leased at Mile End, further to the east

During the late 19th century the Jewish population of Eastern Europe was facing increased persecution and economic hardship. Huge numbers of Russian and Polish Jews fled in search of a better life, and many of them settled in Britain.

Between 1881 and 1914 over 2 million Jewish people left Russia, Poland and the Hapsburg Empire. While the majority went to the United States, around 150,000 settled in Britain, mainly in areas near the docks where they had arrived, in the East End of London and in regional centres such as Manchester, Leeds, Glasgow and Liverpool.

The new immigrants found employment in low wage, labour-intensive industries such as tailoring and cabinet-making, and their presence had a dramatic impact on the Jewish community in Britain.

In 1817 the Jews Free School was founded, with the initial aims of providing 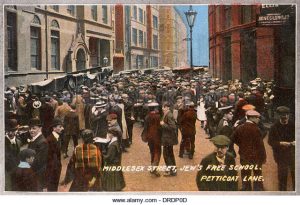 apprenticeships, and countering missionary activity and crime among Jewish youth.

Among the many philanthropic organisations of the period, one of the most important was the Jewish Board of Guardians, established in 1859 to give assistance to the Jewish poor. It was one of the main constituents of what is now Jewish Care.

They generated a vibrant culture based on their native Yiddish, a language derived from Hebrew and German. Yiddish newspapers and literature were widely available and Yiddish theatre flourished.

The number of pupils at the Jews Free School grew rapidly, and by 1900 the school roll had increased to 4,250, making it the largest school in Europe. It educated boys and girls in both secular and religious studies, anglicising the children of immigrants and helping them integrate into British society

Jewish men fought for Britain in all parts of the armed forces. 27-year-old Lieutenant Frank de Pass became the first Jewish recipient of the Victoria Cross after losing his life in action near Festubert, France, in November 1914.

In 1933, the Nazi party came to power in Germany with an openly anti-semitic policy. The Nazi government encouraged violence against Jewish people, their homes and property, and removed their civil rights. Fearing for their lives, many German Jews wanted to emigrate, but few countries were prepared to receive them.

About 10,000 unaccompanied children also came to Britain, in a series of 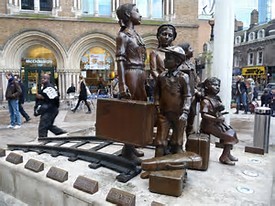 specially arranged journeys known as the Kindertransport. (The image is of the Memorial in Liverpool St Station)They arrived between December 1938 and September 1939. Some were guaranteed by private sponsors, and others were looked after by organisations such as the Refugee Childrens’ Movement. After a few weeks in reception camps, they were taken to Jewish and non-Jewish foster homes or hostels throughout the country. Many were destined never to see their parents again.

Both British Jews and the new refugees from central Europe played important roles in  Britain’s war effort, at home and in the armed forces. At the end of the war, as the devastating reality of the concentration camps was exposed, many camp survivors also came to live in Britain.

Anti-semitism was also present on the streets of Britain. The British Union of Fascists was active from 1932, engaging in acts of violence against Jewish people and buildings, particularly in the East End of London. This culminated with Oswald Mosley and his blackshirts attempting to march through East London on October 4th 1936. Under the slogan “They Shall Not Pass” a crowd estimated at 10,000 turned out to block the streets, and the resultant violent clashes became known as the Battle of Cable Street. Fascism never took root in Britain, and the BUF was disbanded in 1940.

Like other new immigrant groups, Eastern European Jewish immigrants had mostly settled in inner city areas. However by the 1920s, as they became able to afford it, Jewish people began to leave the inner city and move to the suburbs in search of a more peaceful and spacious lifestyle.

In London, the main movement was north, along the new Underground lines to the newly established suburbs of Golders Green and Edgware, as well as east to Redbridge and Ilford. By the 1970s, settlement had extended as far north as the green belt area of Radlett.

The Jewish community is itself diverse, including a wide range of ethnic backgrounds and religious viewpoints. Jewish society in Britain today is lively with a vibrant array of cultural and educational activities.

Life in the East End

At the turn of the 1900s the Jewish population in London had settled around Spitalfields, Whitechapel, Aldgate and Mile End, living in densely populated dwellings.

Many children went to the Jewish Free School founded in 1732. The school expanded throughout the 19th Century as the population grew. An aim of the school was to provide a Jewish education for the young Jewish immigrants. When boys finished school many became tradesmen â€“ carpenters, upholsterers, jewellers, tailors, cabinet makers and wood-workers. The markets were vibrant, noisy, crowded.

The Second World War brought destruction and devastation to the East End and in the following decades people began to move away. Peacetime brought fresh aspiration and hope for the future. Towards the end of the 20th century, many had moved to the capital’s leafier suburbs, such as Barnet, Golders Green and Hendon in north-west London or east towards Essex.

Redbridge had, in fact, been home to a small community of Jewish people since the 1920s. As people migrated from the East End they brought their traditional East End trades to Redbridge. By 1936 there were around 17 Jewish families in the borough and the area started to attract local Jewish businesses. 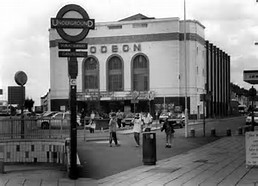 to and by 1970 the Jewish community in Redbridge was fast growing and boasted Europe’s largest Jewish population of 30,000. And on High Holy Days, the Odeon Gants Hill became the Ilford United Synagogue, and Valentines Park the place to strol and make new “friends”!

In 1970 the Stepney Green Jewish School moved to Ilford and the local secondary schools had a high proportion of Jewish children.

Many Jewish women in Redbridge joined WIZO (The Women’s International Zionist Organization) or the League of Jewish Women. Committee meetings and Dinner and Dance fundraising events became part of the social life for many Redbridge women. People tended to socialise more in each others’ homes. There was a trend for coffee evenings, card evenings playing games like Kalooki.

These social activities helped create a close community. Eating out in restaurants was kept for special occasions.

By the end of the 1980s Synagogues, Kosher delicatessens, Kosher butchers, Kosher restaurants, Israeli banks and schools were all thriving in the borough. And here’s a glimpse at Redbridge in 1983; this was the first  Video Magazine produced by the Barkingside Jewish Youth Club.

In the mid to late 2000s, younger members of the community began moving out of Redbridge, into Essex and beyond – sometimes further east to bigger properties in places like Chigwell but also to Golders Green and Stamford Hill in north London.

© This material has been supplied by Judith Garfield MBE and we are very grateful to her for allowing us to use it (with some slight editing) on our website. For more information see www.hidden-histories.org.uk